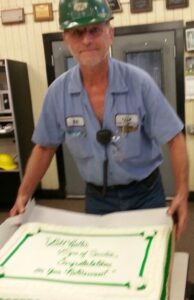 Bill Hollis worked for Owen Industries from August 1970 to August 2015. We interviewed Bill on his 45 years of service.

Bill Hollis: Knowing that men like Ed Owen, Bob Owen, Buss Feller, Fred Koehler and Dave Riggs to name a few… had the faith and trust in me to do the best job possible.

BH: New Machines like the Vortman, Ficep Angle Line, MG Burning machine etc and of course we have men with great skills to run these particular machines.

OII: Do you recall a past project that went through the shop that challenged the team?… one of those “they said it can’t be done” projects?

BH: After 45 years working at PVS, it’s hard to remember, there were so many! I will say that the guys I worked with and all those involved in the many projects over the years had a positive attitude, and there was no such thing as, “It Can’t be done”, we got it done regardless of how small or how big.

OII: What do you think the future has in store for Metal Fabricators and for Owen Industries?

BH: That’s tough one, now a days people around the country want to sit in front of the computer or in their ac or nice warm office, and not so much in weather when it’s either hot or cold in a fab shop. But, if time comes, and there is only one fabricator left…. it will be PVS/Owen Industries!!!

OII: What’s different from the way things were done your first day on the job from the way they were done on your last day working for Owen Industries….Technology? Equipment? Processes? Facility?

BH: Some products are still made the same way on the same machines when I started. And probably will be there for years to come. As an example the radial drill and the press breaks. But, who would have thought that technology, equipment, the never ending improvement to the process and facility would have changed what used to take hours to do, now takes a few minutes.

OII: Do you have any humorous stories to tell regarding your experience with your fellow employees, Management or the Owners of the business? Most memorable!

BH: One of many but I do recall one, it was hot day about 115+ in the shop, my dad stopped by my machine with a cold drink for me (dad worked on the side loader at the time) Here came Ed Owen, Dad said to him, “What are you doing out here sweating in this heat?” Ed fired back, I don’t sweat, I PERSPIRE, and it’s you that’s sweating”

Final Thoughts: Treat everyone the way you would like to be treated, and most of all, listen to what they have to say, many a time you’ll find that the “can’t be done job”, can be done if you listen and involve your team.

Thank you Bill for your many years of service and helping to make Owen Industries the best at what we do!